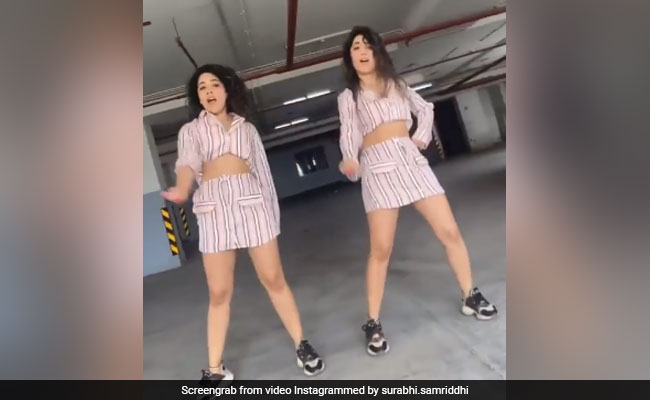 Chinki Minki did a bang dance on ‘2 seater’ song

Chinki Minki of ‘The Kapil Sharma Show’ means Surabhi Samriddhi has left no stone unturned to win the hearts of people with her dance. Not only did she create a tremendous identity with her acting, now she is always in the discussion about her dance as well. A video of them is also getting viral on social media, in which both of them are seen dancing in a bang on Kanika Kapoor’s song ‘2 Seater Car’ Song. This video has been shared by Chinky Minky from her Instagram account, which has been liked more than 52 thousand times so far.

Fans are not tired of praising him for this dance video of Chinki Minki. In the video, Chinky Minki is seen dancing in a banged up song on the ‘2 Seater Car’ Song. In the video, from his dance steps to the expressions, he looks amazing. While sharing this video, Chinky Minky wrote, “Dance to the tune of ‘2 Seater Car’ Song and Jhumme …” Fans are also reacting to this video by sharing fire emoji and heart shape emoji. Let me tell you that this is not the first time Chinki Minky has caught the attention of the people with her dance and style.

Chinki Minki, ie Surabhi Samriddhi, has been in the discussion about many of her dance videos even before this. Talking about his career, he entered Chinki Minky in ‘The Kapil Sharma Show’. Archana Puran Singh herself was also surprised to see the acting and style of both. Apart from this serial, both of them also made a tremendous identity on social media. On Instagram, Chinky Minky has more than 61 lakh followers, while on YouTube, her number of subscribers is more than 20 lakhs. These days, Chinky Minky is playing the roles of ‘Sweety’ and ‘Mithi’ in the upcoming TV show Hero.

Ayub Khan said the pain, said – ‘I have not earned anything for a year and a half,’ if this continues, then there is no option but to ask for help ‘

… So is this contestant who has won Bigg Boss 14, only formal announcement is left

… when Somi Ali revealed, “Aishwarya Rai had come between him and Salman Khan …”