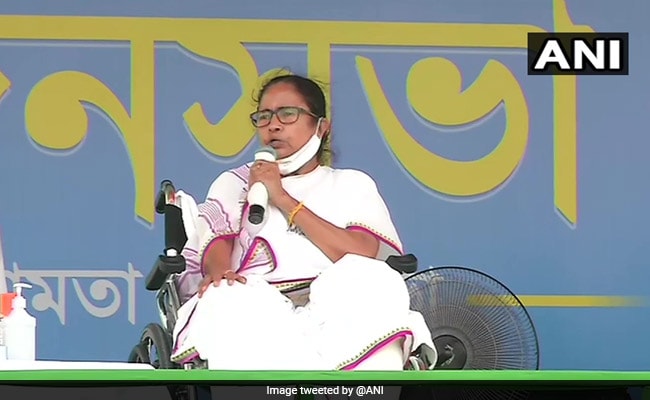 Being a women chief minister, women have a special attraction towards Mamata Banerjee.

West bengal assembly elections 2021: Mamta Banerjee’s strategy in West Bengal elections is clear. She has specially chosen women voters in this election. Mamata knows that women have a special attraction towards them as women chief ministers. This is the reason why she addresses women exclusively in her rallies. One is Mamta Banerjee’s rally in Bangla language and believe it or not, language is a definite issue here in West Bengal, you will find many people who will tell you directly that Hindi is not known, that is, they do not know Hindi, especially women. , This is the reason that when Mamta comes to the rally, she tries to communicate directly with the women, she speaks in Bangla, she also raises the issue of Bangla vs others. She asks the women whether they are getting the benefit of the work they have done for them and the women also give the answer to ‘Mamta Didi’, so Mamata Banerjee’s strategy is clear, she feels that she is getting more number If you get women votes, also get minority votes in large numbers and if you get a small number of majority people or the remaining Hindu votes, then it can be decided once again to become the Chief Minister.

Not only this, Mamta Banerjee makes mention of Rajvanshi community, Matua community and Gorkha community in her speech. She tells people what they have done for them. Mamta Banerjee does not miss making the issue of Bangla vs others in her rally, if seen in a single way, she mentions Bangla vs outsider in her speeches. She says in speeches that she will not allow Bengal to become Gujarat, she will not allow Bengal to become Uttar Pradesh. It is clear that Mamata Banerjee is doing the same work that Prime Minister Narendra Modi used to do till a few years ago, when he connected the election of Gujarat with the identity of Gujarat. Today in West Bengal, Mamta Banerjee is linking this election with the identity of Bengal and trying to make it there itself.

Mamta Banerjee knows that the Hindi-speaking people here in West Bengal are mostly with the BJP. Whether you talk about Howrah or Hubli or Kolkata, there are a large number of Hindi speaking people in these areas. These people mainly come from Bihar, Uttar Pradesh, in which BJP has made good inroads. Also, the area of ​​North Bengal that BJP has held, the BJP also has a hold over it, especially in Rajbansi, Matua and Gorkha communities. To break this ‘combination’ of the BJP, Mamata Banerjee has adopted a strategy to keep her grip on the minority and women voters. At the rally of Mamta Banerjee, slogans of ‘Khela Hobe’ are played, there is football, a special attraction for women is the song of ‘Khela Hobe’. Especially when the ‘Khela Hobe’ is played, the women dance on it a lot and later the sister, who she is, teases people with the issue of ‘outsider vs Bengali’.

Mamta Banerjee is the sole star campaigner of the Trinamool Congress. You can say that he is also the captain, the coach is also the same, the center forward is also the same and the goalkeeper is also the same. This is the reason why Mamata Banerjee tells people how she is fighting against a single woman, BJP. She is fighting against all the resources of the BJP and on this basis she is seeking votes from the people, of course people like her too and her rallies are crowded and people thrash a lot. Mamta knows that if she gets majority vote of women and minorities and little vote of other society, then she can come to power again. On the other hand, the Election Commission banned Banerjee for not campaigning, it has also created a sympathy in the mind of the people in favor of Mamata, which will also benefit the Trinamool Congress. But the biggest question is that ‘Khela Hobe’ or ‘Paribortan Hobe ..’ in Bengal.