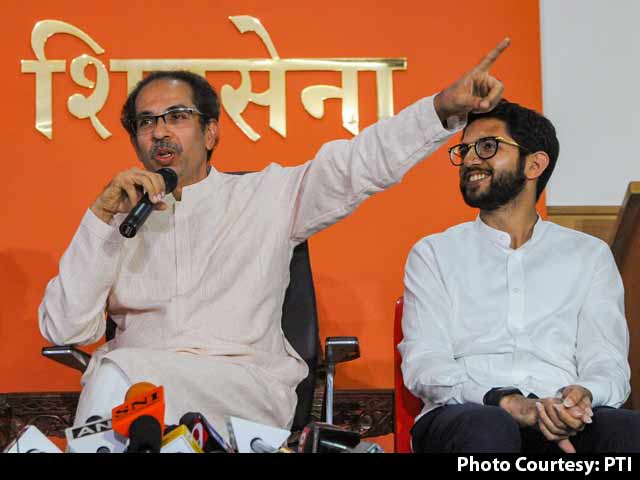 How to invest in someone’s death, it should be learned from the current opposition: Shiv Sena (File photo)

API of Mumbai Police in suspicious gel found near Mukesh Ambani’s house and recovered in gelatin case Sachin Waje Even after getting so much evidence against (Sachin Vaze), Shiv Sena (Shiv Sena) is questioning the investigation of NIA. The editor of the Sena mouthpiece Saamana (Saamana) has asked that the gelatin sticks ‘NIA’ What investigation did Uri attack, Pathankot attack and Pulwama attack?

The editorial said that 20 sticks of gelatin did not explode on Mumbai’s Carmichael Road, but in the past few days in politics and administration, these sticks have been exploding. In this whole matter, now Mumbai Police Commissioner Parambir Singh has to leave his post. The opposition has raised some questions in this case, this is true, but the Anti Terrorist Squad of the state was investigating the matter by registering a case of murder. Meanwhile, the ‘NIA’ took the command of the investigation in a hurry. The motive behind this will be revealed soon.

It said that in any case, despite the connection of terrorism behind it, the ‘NIA’ has entered the investigation of this crime, what is the matter? ‘NIA’ investigates cases related to terrorism, but what did the ‘NIA’ investigating gelatin sticks investigate in Uri attack, Pathankot attack and Pulwama attack, which Satyashodhan, how many criminals were arrested? This is also a mystery, but 20 gelatin sticks in Mumbai seem to prove to be a big challenge for ‘NIA’. The state’s opposition is taking credit for this entire development.

Mansukh Hiren died suspiciously and everyone is sad for this. The Bharatiya Janata Party is a little sad. But one of the MPs of the same party, Ramswaroop Sharma, died suspiciously in Delhi during the commencement of the session of Parliament. Sharma was a strong Hindutvaist. BJP people are not seen beating his chest about his suspicious death. In the case of Mohan Delkar’s suicide, no one is ready to speak even one word. Sushant Singh Rajput and his family have all forgotten.

How to invest in one’s death, it should be learned from the present opposition. The effort of Mumbai Police to reduce morale is going on in this phase. The opposition should not commit at least this much sin. If the opposition dreamed of taking over the power of Maharashtra, then this is their problem. But by doing such mischief, they will get the chair of power, it is an illusion. If Mansukh was killed, the culprits will not survive. If he had committed suicide, the reason behind it would be found and for that reason there has been a huge reshuffle in the police forces of the state including Mumbai. The opposition should believe it.

Paramveer Singh was replaced by the post of Mumbai Police Commissioner, which means he does not prove guilty. Paramveer took command of Mumbai in difficult times. In cases like Sushant and Kangana, he did not let the morale of the police break. Therefore, even if the CBI came forward in this case, the investigation of the Mumbai Police could not go to the CBI. The TRP scam file was opened during his time. Paramveer Singh was angry with a specific lobby in Delhi, which was for this reason. He had 20 sticks of gelatin in his hand. Panic spread in the police team without a blast in those rods. The new commissioner Hemant Nagrale will have to work with courage and caution.

At the same time, BJP has also commented in this matter. BJP spokesperson Ram Kadam said that facing today, the newspaper is backing the Waje gang, supporting them. On the other hand, Home Minister Anil Deshmukh points to the Shiv Sena, saying that there have been major mistakes. Saying this, they are being harassed. Law and order has collapsed due to their mutual estrangement.